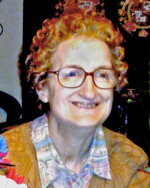 A 1967 graduate of Wakelon High School, Ginny worked at the Zebulon Public Library for 25 years as a staff member or volunteer.  She also volunteered for 10 years at Guardian Care Nursing Home in Zebulon.

In 1996, she moved to Greensboro, where she worked at TJ Maxx for six years.  In 2005, she moved to Woodland Terrace, where she made many friends and enjoyed calling Bingo, attending Bible study, taking classes, going on group outings, and assisting staff any way she could.

Ginny grew up as a member of Zebulon Baptist Church.  Although she lived in Cary, she returned as a member of the church and attended as much as she could.

Her heroes were law enforcement and emergency responders, and she was always thrilled to be in their presence.  She loved people and enjoyed visiting and being with family.

Diagnosed with breast cancer in 2009, Ginny faced every challenge with her sweet spirit and looked forward to visits with the medical staff who cared for her.

She is survived by uncles and aunts, Robert Hester of Richmond, Va., Gene and Katherine Hester of Springfield, Va., and Wendell, Carol Hester of Wilson, and Georgia Eddins Mitchell of Emerald Isle; many cousins and their families including Hugh and Mary Jo Cashion of Wendell, Suzanne Price of Wendell, Sandra Richardson of Apex, and Kenneth and Martha Jane Eddins of Gastonia; and special friend, Obie Wooten of Woodland Terrace.

Ginny wished to express appreciation to longtime friend and adviser Sharon Stephens of Rocky Mount; Dr. Maha Elkordy and staff of the Cancer Center of North Carolina, Cary Office; Janet Lively, Reem Hadi and other staff members of ComForCare; and Janet and Wayne Harper of the Woodland Terrace staff.

Funeral services will be held Wednesday, April 18, at 11 a.m. at Zebulon Baptist Church with the Rev. Jack Glasgow officiating.  Burial will follow at Gethsemane Memorial Gardens in Zebulon.

The family will receive friends 7 – 8:30 p.m. Tuesday, April 17, at Strickland Funeral Home, 211 W. Third St., Wendell, and other times at the home of Hugh and Mary Jo Cashion.  www.stricklandfuneralhomes.net