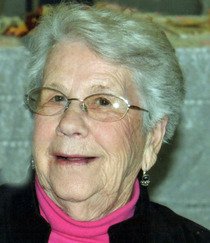 MIDDLESEX – Thyra Emogene Faison Glover, 92, went to her heavenly home on Saturday.  A native of Wake County she was daughter to the late Charles “Gus” & Kiley Coley Faison.  She was a member of the Daughters of the American Revolution and Eastern Star.  Most of her life she was a homemaker but she also worked for the NCDMV & sold World Book Encyclopedias.  She was preceded in death by her husband of 68 years, A. G. Glover & daughter Yvonne Hinton (Jimmy Neil).