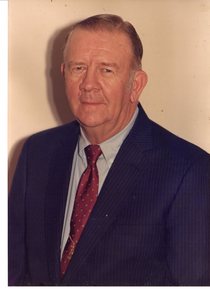 Paul Grady Chalk, 85  passed away on September 24, 2016.  He was a loving husband, father, grandfather, and great- grandfather. He was born on October 17, 1930 to the late Paul Chalk and Ruby Barham Chalk.   Grady attended Rolesville High School where he was a member of the baseball and basketball teams.  He served in the US Army in the Korean War as Military Police for two years.    In 1957 he married the love of his life, Dolores Pearce Chalk whom he was happily married to for 59 years.  Grady worked along side his wife Dolores at Westinghouse from 1954- 1988 where he retired after 34 years of service in the tool and dye department.  Grady was a faithful member of the Whitestone Masonic Lodge where he was a Master Mason.  He also was an avid quail hunter and spent many hours hunting with his friends and faithful birddogs. Grady loved his family.  He was so proud of his wife, daughters and granddaughters. His pride and joy were his great-grandchildren, Evan and Lillie who changed his name to “Buddy”.   Every morning and afternoon, you could easily find Grady at his favorite place, Eddins Oil Company.  He enjoyed the friendship, storytelling, and camaraderie with all of his many friends. He faithfully attended his daily fellowship sessions at “the store” as long as his health allowed.

Flowers accepted or contributions may be made to Faith Challenge of Zebulon Baptist Church, 400 N. Arendell Ave., Zebulon, NC 27597.

A celebration of Grady’s life will be held at Zebulon Baptist Church on Tuesday, September 27 at 2:00 pm with graveside service with Masonic Rites following at the Zebulon Town Cemetery.  Visitation will be prior to the service from 12:30 pm-2:00 pm. and other times at the home of Ben and Dianne Flora, 9201 Hunters Greene Drive, Zebulon NC.