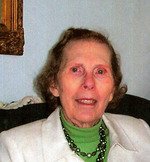 Mary of Wendell passed away on Monday, September 6, 2010 after a long illness. She was born in 1923 in , the only child of Joel Lee and Stella Mock Hunter. She married Rayford Bryant Whitley II of Wendell in 1942, and moved to Wendell, where she resided until her death. She was a founding member of Saint Eugene’s Catholic Church, and was a devoted and dearly loved Mother, Grandmother, and Great-Grandmother.

She was preceded in death by her husband Ray and son Rayford Bryant “Bucky” Whitley III. She is survived by her son Joel Whitley (Vickie), and daughters Buchanan (Neil), Amy Brown (Tim) and Claire Balfour (Mike). She also leaves behind her beloved grandchildren, Bill Buchanan, Steve Buchanan, David Buchanan, Tiffany Stuart, , and Harper Brown, as well as her 5 great-grandchildren, Abby, Whit, Emma, Whitley, and Gracie.

Donations may be made in her name to the Building Fund of Saint Eugene’s Catholic Church in Wendell.