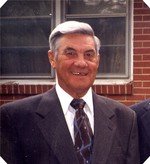 ZEBULON – Lawrence “Mann” Lloyd Creech, Sr., 78, of 8433 Riley Hill Rd., died Tuesday at Coventry House.  A native of Wake County he was son of the late Clem & Ester Whitley Creech, Jr.  Mr. Creech was a graduate of Wakelon High School and was a U. S. Army Veteran of the Korean Conflict.  He worked at Westinghouse for 27 years.  He was a member of Whitestone Masonic Lodge and the Amran Temple.  He was preceded in death by his beloved wife of 51 years, Mrs. Bette Sue Creech.


In lieu of flowers the family requests memorial contributions to the Shiners Hospital Burn Center or to Heartland Hospice.


Funeral service will be 11 am, Thursday, Union Chapel Baptist Church with visitation from 10 to 11 am  prior to the service, and other times at the home of Penny & Julia Creech, 8325 Cunningham Rd.  Interment to follow at Gethsemane Memorial Gardens with Full Masonic Rights.