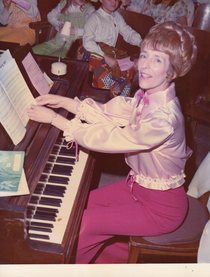 KNIGHTDALE – Justine Johnson Alger, 85, went home to the Lord on Tuesday.  A native of Woronoco, MA, she was daughter to the late Henry & Constance Sands Johnson.  She graduated from Westfield High School in Massachusetts in 1947 & continued her education earning a Masters degree in Music from Julius Hartt School of Music with a BA in Education.  Justine raised a family of 7 children in Germantown, OH.  She played piano & organ for numerous churches, accompanied for countless numbers of singing groups, soloists, & rock groups.  Justine taught piano lessons, conducted music classes, and directed numerous church choirs.  Her magic fingers played for the enjoyment of many from OH & all along the east coast. She was preceded in death by the father of her children, Walter E. Phillabaum, Jr.

Flowers welcomed or memorials may be made to the music programs of either St. John’s United Church of Christ, Germantown, OH, or Zebulon United Methodist Church.

Memorial service 2 pm, Friday, Zebulon United Methodist Church with visitation in the sanctuary from 12:30- 2 pm, prior to the service.