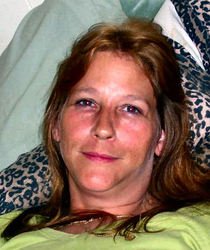 RALEIGH – Julie Lynn Upchurch Stallings, 48, died Saturday at home.  A native of Wake County she was preceded in death by her father, Jimmy Wayne Upchurch.  Julie was fluent in Spanish, ASL, and calligraphy.  She loved rock and roll and was a fantastic cook.  She took pride in everything and was the epitome of a TARHEEL.  She was also preceded in death by a son, Jay Stallings.

A private memorial service will be held at a later date.