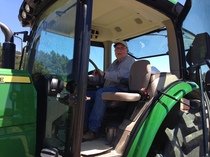 RALEIGH – Joseph Albert Priest, 71, passed away after a courageous battle with lung cancer.  Born on November 1, 1944 in Hoke county, NC; he was the oldest of 3 children of the late John Albert & Sarah Margaret Medlin Priest.  He was preceded in death by brother, Thomas Ray Priest.

Joseph met the love of his life while attending NC State University in 1965, Frances Kathleen Crowder and later were married on September 10, 1966.  In 1967 Joseph graduated from NC State University and began a 48 year career with the U. S. Department of Agriculture and NC State University.  He was drafted by the U. S. Army in 1968 and served his country for 2 years including a deployment to Germany.  Joseph authored and co-authored several research papers while working with the U. S. Department of Agriculture and NC State University dealing with applications and methods of applying tobacco growth regulator research for sucker control on flue-cured and burley tobacco.  For more than 20 years, Joseph served as coordinator of the regional Tobacco Growth Regulator Committee, which facilitates and plans plant growth regulator research in all five flue-cured tobacco producing states of North Carolina, South Carolina, Georgia, Florida, and Virginia.  This committee has established sucker control treatments which have reduced residue of certain plant growth regulators.  Joseph was known throughout the tobacco industry for his dedication, work ethic, commitment to excellence and integrity for the industry.

For his outstanding life’s work, he was named an Honorary Tobacco Great and received this award from the NCSU’s College of Agriculture and Life Sciences during Tobacco Day on December 4, 2014, at the Johnston County  Extension Office in Smithfield, NC.  On Friday February 6, 2015 Joseph also received a very prestigious award from the Kenly Tobacco Museum naming him the recipient of their annual Excellence in Tobacco award which were presented by Commissioner of Agriculture Steve Troxler.  He was a member of Forest Hills Baptist Church since 1975 and had served on numerous committees such as ushering, building and grounds, & transportation.  He enjoyed working outdoors in his yard, loved sports especially following the New York Yankees and NC State football and basketball.  More importantly, Joseph was proud of being a loving husband, father to his 3 children and a grandfather.

In lieu of flowers memorials may be made to Forest Hills Baptist Church, (The Gathering Place), 201 Dixie Tr., Raleigh, NC 27607.

The family would like to thank Dr. Jeremiah Boles and staff of the Rex Cancer Center for their loving care.

A celebration of Joseph’s life will be held 2 pm, Tuesday, December 29, at Forest Hills Baptist Church with visitation from 12:30 -2 pm, prior to the service.  Graveside service 2 pm, Wednesday, Montlawn Memorial Park.