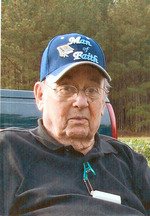 February 5, 2017
J. ROBERT PERRY
Dec. 10, 1917 – Feb. 7, 2011
ZEBULON – James Robert Perry was born in Nash County on December 10, 1917 to the late Harris Robert and Loutoria B. Perry.
He accepted Jesus Christ as his personal savior in 1930. He always believed the Holy Bible was his road map to life and always praised the Lord for the many blessings of life. He loved people and was loved by many. He was a faithful member of Pilot Baptist Church for 57 years. During this time he served several terms as Chairman of Deacons, Training Union Director, and Sunday school Superintendent and served on numerous church committees. In 1997, he married Lula Massey and moved his membership to Union Hope Baptist Church.
He volunteered his services at Guardian Care in Zebulon preparing for Sunday Worship Service and participated in Prayer Services on Thursday nights for 14 years.
Robert farmed for over forty years. Many of these years he participated in a program with N.C. State College in Tobacco Research. He tested various tobacco varieties, sucker control, disease and insect control and research for mechanical harvesting. Later, he was employed by the State Department of Transportation where he retired in 1982.
He was preceded in death by Stella Jeans Perry, his wife of 57 years, and Lula Massey Perry, his second wife of 12 years; six brothers, one sister and a granddaughter, Traci L. Perry.
Funeral service will be held 2 pm Thursday at Union Hope Baptist Church. Burial, Gethsemane Memorial Gardens in Zebulon.
He is survived by his daughters; Melanie Jeffreys and husband Jimmy of Bunn, Barbara Gay and husband Myron of Kenly, Brenda Langley of Zebulon; sons, Robert Dan Perry of Garner and Roney Perry and wife Kathryn of Zebulon; stepsons, Ray Massey of Zebulon and Randall Massey of Raleigh and stepdaughter LuAnn Hinton of Archer Lodge; 9 grandchildren and 9 great grandchildren.
The family would like to thank Dr. Wynia and staff at Raleigh Cardiology and Hospice of Wake County for their love and compassion shown to their Dad and family.
Flowers accepted or memorial contributions may be made to Union Hope Baptist Church, 12712 Hwy. 97 W., Zebulon, NC 27597.
The family will receive friends 6:00 – 9:00 pm Wednesday at Strickland Funeral Home, 211 W. Third St., Wendell and other times at the home of Roney and Kathryn Perry, 10 Ray Ave. (Bunn Lake), Zebulon. www.stricklandfuneralhomes.net