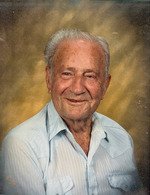 WENDELL – Fred Isaac Pryor, 88, of Wendell went home to be with the Lord on Friday, September 3, 2010.  Fred was born in Wichita Falls, TX on August 18, 1922 to Joseph and Bertha Pryor.  He was a WWII Veteran. Mr. Pryor retired in 1986 from Southern Pacific Pipelines.  He was also a member of Hephzibah Baptist Church.  He was preceded in death by hs wife Polly, his son, Jimmy Pryor and his daughter, Sherry Gibbs.