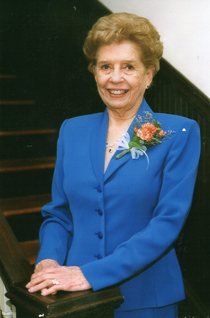 WENDELL – Elizabeth “Lib” Baker Henderson, 88, went to be with her Lord and Savior on Wednesday, December 30, 2015.  She was born on October 5, 1927 and was raised in Wakefield.  Lib was a loving, generous soul that cared for her family and friends above all else.  She was always near to lend a helping hand or offer a hug.  Lib’s children were most important to her.  She enjoyed family meals with everyone eating together.  She loved to cook and could make a meal for two or twenty with little effort.  Lib’s smile was warm and unforgettable.  She loved to play bridge with friends and card games with her grandchildren any opportunity she had.  Her favorite companion was her dog Buddy and he was by her side for eight years. They were inseparable.  Lib often said Buddy was “worth a million dollars.”  She will be missed terribly but her unconditional love for her family will live forever in our hearts.

Lib was lovingly cared for by her family during her last year, while living with David and Thresa in their home in Wendell.   She was able to see her friends, play bridge and be near to those she loved.