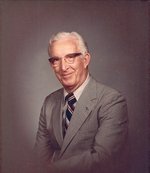 The prayer of Dover Wilson Hinton was Matthew 25:21, to hear the Lord say “Well done, good and faithful servant.”

Dover was a devoted husband, brother, uncle and friend. He passed at his home in Wendell, surrounded by his loved ones.

He was born in Emit, North Carolina on December 4, 1912 to Mallie C. Hinton and Adlena Hinton. He was married to Dorothy Jones Hinton for 47 1/2 years, who preceded him in death.

He was a graduate of Corinth Holder High School and was very proud of his school and Emit community. He thought Johnston County was the greatest.

A man with many interests, he loved baseball. The Atlanta Braves was his team until Josh Hamilton came into his life and then his favorite team became the Texas Rangers. UNC was his beloved college team for almost 100 years. When the Tar Heels played basketball, Dover could always be found watching. Fishing was a great joy to him and he loved to go with his wife Dorothy to Lake Wendell or Topsail Beach for fishing. He was also a beekeeper and raised beagles.

In July 1936, he moved to Wendell and fell in love with his new community. He worked as a meat cutter and when World War II broke out, he enlisted in the Navy. After the service, he owned a dry cleaning business, Ideal Cleaners, for over 38 years. At the age of 79, he became a greeter at Wal-Mart, a job he loved because he loved people and was loved by all who met him.

Dover was a member of the Masonic Lodge a 33° Degree Mason for 64 years and Order of Eastern Star for over 63 years. He was also a member of Wendell Baptist Church for over 70 years, where he served as a Deacon o various committees and as a Sunday School teacher for kindergartners when in his 80s.

For over 30 years, he was a volunteer Fire Fighter for Wendell and became its third Fire Chief. He also served as a Town Commissioner. Giving back to his community was central to his life.

Even after he retired, he continued his community service by becoming a Hospice volunteer and a volunteer at Raleigh Community Hospital in his late 70s.

Dover was a man who lived a full life, and never passed up an opportunity to help someone in need. He lived the Christian life filled with daily reading of God’s Word, prayer and a life committed to service to others.

He leaves behind many nieces and nephews of whom he was very proud and loved. He was a wonderful friend to all and wanted happiness for everyone he knew. He also leaves behind a special friend of over 23 years, Garnet Harper, whose friendship was marked with love and happiness.

Funeral service will be 11 am, Wednesday, Wendell Baptist Church. Interment to follow in Greenmount Cemetery.

The family wishes to thank his caregivers, Sandra “Thelma,” James, Kimmie & Joyce for their kindness to Mr. Dover.

Visitation will be 7-9 pm, Tuesday, Strickland Funeral Home, 211 W. Third St., Wendell, NC 27591 and other times at the home. Share your memories, photos, & condolences at www.stricklandfuneralhomes.net