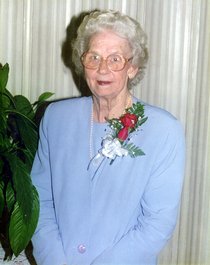 CARY – Blanche Ozetta Smith Keith was born on October 2, 1916 in Fuquay-Varina, the 6th child of 9 surviving children who were born to Vivian and Corena (Baughcom)  Smith.  She resided all her life in Wake County and since her baptism at the age of 8, was a life-long member of The Church of Jesus Christ of Latter-day Saints.  She was the granddaughter and daughter of early Wake County Latter-day Saints Church members who were baptized in 1895 in Fuquay Springs.  She was preceded in death by her husband, of 27 years, George Edwrith Keith in 1965, son, Donald Wayne Keith in 2004 grandson, Jeffrey Harold Keith in 1969, and great granddaughter, Katie in 1990.  Also preceding her were five sisters; Netha S. Young in 1994, Retha S. Cross in 1993, Naera S. Alrich in 2009, Thelma S. Boshard in 2003, and Nellie S. Mills in 2008; two brothers, Callis D. Smith in 1987 and V. Daron Smith in 2009.

Those who are contemplating remembrances may consider flowers, or memorial contributions to Cystic Fibrosis Foundation, or Hospice of Wake County.

Funeral service will be held 11 am, Monday, The Church of Jesus Christ of Latter-day Saints, Forestville Road, Knightdale, with visitation from 9:30 – 10:30am prior to the service and other times at the home of Jimmy and Jo.  Interment will immediately follow in the family plot on 1st Avenue in Knightdale.