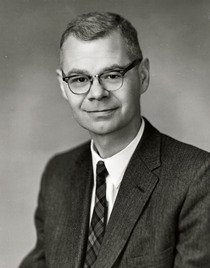 Winton Blair Rankin died May 26, 2015, in Raleigh, North Carolina, at the age of 98.  He was a resident of Zebulon, North Carolina, from 1975 to 2006, when he moved to the Springmoor Retirement Community.  Winton was born October 26, 1916, in Bessemer City, North Carolina, to James Daniel Rankin and Tula Abernathy Rankin, and spent his childhood in Boone, North Carolina, where his father was a Methodist minister and later was head of the English department, Dean, and President of Appalachian State Teacher’s College.

He began as a pharmacist in Wilson, NC, then joined the Food and Drug Administration in 1940 as a seafood inspector.  He worked his way up to Deputy Commissioner of the FDA in 1966, then he was appointed Special Assistant to the Assistant Secretary for Health and Scientific Affairs. He retired in 1972 at age 55.

Also preceding him in death were his brother Charles Elmer Rankin, his sister Ruth Rankin Rutherford, and his daughter Mary Anne Rankin Muir.

Funeral service 11 am, Tuesday, Zebulon United Methodist Church with visitation from 10-11 am, prior to the service.  Burial will follow in Gethsemane Memorial Gardens.