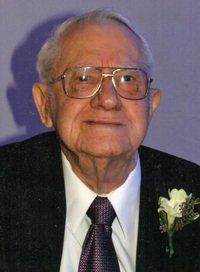 After high school Horace proudly served 43 months in the US Army stationed throughout the South Pacific during World War II.  He then began a 35 year career in banking with Peoples Bank & Trust Company.  Horace was a lifelong member of Zebulon Baptist Church.

Flowers are welcomed or memorial gifts can be made to the building fund at Zebulon Baptist Church, PO Box 366, Zebulon, NC  27597.

A service for Mr. Gay will be held Wednesday, September 25, at 11 AM at Zebulon Baptist Church.  Burial will follow the service at Zebulon Town Cemetery.