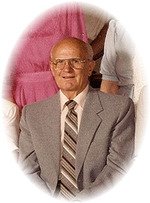 KNIGHTDALE – Stanley Johnson, age 96, passed away June 27, 2011.  He was born in Spenser County, Kentucky, November 18th 1914 and came to Knightdale, North Carolina, from Spring Hill, Florida, ten years ago. Stanley was a Quality Control Inspector for Teledyne Monarch, Hartville, Ohio. Stanley was a Christian and active in the service of the Lord. He enjoyed working with his hands, mainly construction work and built all three of the homes they lived in prior to his retirement. Garnet Johnson his wife (1915-2007) preceded him to glory in 2007. Both Stanley and Garnet were devoted Christians and great prayer warriors and very instrumental in the Christian growth of their family.