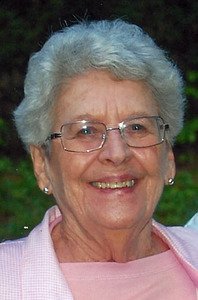 Ruth Kindsvatter passed away in Raleigh, NC on Sunday, July 7, after a brief illness.  Her 95 years were lived in excellent health until the last two months.

Ruth Christine Schneidmiller was born in East Liverpool, Ohio.  She was born the first of nine children of Henry and Christine Schneidmiller.  Ruth graduated from East Liverpool High School in 1936 and then studied piano and organ in Pittsburgh and Philadelphia, PA.  On March 24, 1940, she married the love of her life, Wray Kindsvatter.  That love affair spanned 62 years until his passing in 2002.  Ruth and Wray lived in Steubenville, Ohio until the early 70s when they relocated to Sarasota, Florida.  Raleigh, NC became their home in 1991.

Ruth was a gifted piano teacher and organist.  She shared her talents on a continuing basis with churches in Steubenville, Sarasota, and Raleigh throughout her adult life.  Ruth was a long-standing member of Philanthropic Education Organization (PEO) and was a member of St. Paul’s Christian church choir in Raleigh.  She enjoyed choral singing and often served as substitute organist.  She most recently blessed the church when she played the organ on Easter Sunday 2011.

Though Ruth’s homes over the years existed at several addresses in distant towns, there were constants that never changed.  Hearty laughter, joyous music, and delicious meals (especially baked goods) were always present.  Her warm, caring spirit touched the minds, hearts and souls of all who knew her, particularly her grandchildren and great grandchildren.

The heavenly choir just got a great addition.

A memorial service to celebrate Ruth’s life will be held at St. Paul’s Christian Church in Raleigh, NC @11:00 AM on Saturday, July 13.  Visitation will be following the service in the Fellowship Hall and at other times at Fritz & Lucy’s home.  Internment of ashes will be at Riverview Cemetery, East Liverpool, OH.