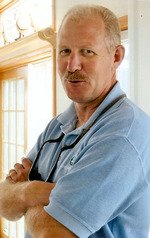 Roger  Andrew Beane, 53, of 1019 Tarford Place, died Saturday. Roger was a true family man.  He was a loving son, brother, nephew, cousin, and uncle, and embraced joyfully every moment of being a husband and father.  Roger worked for Federal Express since 1989.  He will be remembered by many as a loyal friend and highly respected co-worker.

Roger faced all challenges in his life with dignity and his beloved family by his side. His enthusiasm for life was infectious. He loved exploring the beautiful mountains, beaches, and lakes of North Carolina with his family and friends.  He was an avid Duke basketball fan.

A Mass of Resurrection will be celebrated at 10 am on Tuesday at St. Luke the Evangelist Catholic Church, 12333 Bay Leaf Church Road, Raleigh 27614.

In lieu of flowers the family requests memorials to the Patrick and Michael Beane College Fund c/o any SunTrust Bank.