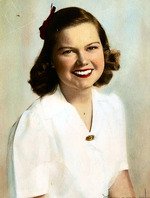 WENDELL – Pauline Hardwicke Narron of Wendell, NC passed away peacefully on Sunday, August 29, 2010 with her children and grandchildren by her side.  A native of Wake Forest, NC, she was daughter of the late John Hart “Doc” Hardwicke and Georgie Annie Jones Hardwicke.  Her parents owned and operated Hardwicke’s Pharmacy and a bus station (East Coast Stages) in Wake Forest from 1928 until 1950.  Her brothers, Captain John Hart Hardwicke, Jr. and Sidney Maynard Hardwicke also preceded her in death.

Pauline was a graduate of Wake Forest High School in 1936 and WC-UNC (now UNC Greensboro) in 1940.  After college she taught school in Red Springs for two years before she moved back to Greensboro taking employment with Laboratory of Hygiene at WC-UNC.  She met Welch Narron of Emit, NC at a USO dance in Greensboro before he shipped out to India during World War II.  They corresponded during the war and were married on June 16, 1946 just 3 months after Welch returned home from service in Asia with the US Army Air Corp.  Pauline and Welch owned and operated Narrons Auto Supply and Welch Narron Insurance Agency in Wendell from 1948 until Welch’s death in 1984.  She spent the last 26 years of her life being a full time Mother, Grandmother, and Great Grandmother, attending Wendell Baptist Church when she was not at the East Wake Senior Center and spending time at her home on Topsail Beach as often as she could catch a ride with James and Cleo Liles or her own family.

Her family wishes to acknowledge the gracious and loving care she received from the nurses and staff at Wellington Nursing Home in Knightdale where she lived for the final 3 years of her life.

For those who wish to make memorial contributions and in lieu of flowers, please donate to the Wendell Baptist Church, Funding the Future, PO Box 187, Wendell, NC, 27591