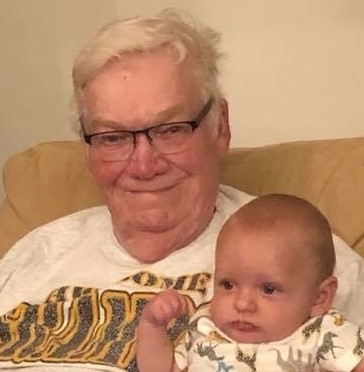 Nathan Eugene Ard was born in Laurel, Mississippi on June 14, 1933. He was the son of Nathan and Bessie (Jones) Ard and was the oldest of four children. He was preceded in death by his parents, and siblings Annie, Jimmy, and Terry Ard. He has six children, Nathan “Gene” Jr. of Connecticut, Dianne (who also predeceased him), and four bonus children, Floyd Swilley (Laurel) of Florence, SC, Libbi Sheridan (Pete) of Lexington, SC, Kim Edwards (Jerry) of Little River, SC, and Jean Coombs (Jeff) of Zebulon, NC.  Together with his Virginia Vivian Ard, his beloved wife of 37 years, they loved their twenty-two grandchildren and twenty-eight great grandchildren, with three more expected this year.

Nathan loved his country and was proud to have served in the Navy during the Korean War. He worked for 35 years on the GM&O Railroad (now known as Illinois Central Gulf).  After retiring from the railroad, he spent 14 years as a microfilm archivist for the Church of Jesus Christ of Latter Day Saints, where he took great care and pride in handling historic documents so they could be preserved for future generations. Nathan also worked as a security guard at WakeMed Raleigh Campus for 9 years before retiring in 2013. He was respected and loved by all of the security team and staff for his kind and compassionate nature.

Nathan attended the University of Alabama and remained a lifelong supporter of the Crimson Tide. He was highly patriotic and he loved to travel by train and pilot small planes. He had a servant’s heart and spent many hours giving back to his community with the Jaycees, American Legion, and various other service organizations through his church. During his many years of church service he often helped those in need, always willing to share all that he had. Most of his acts of service went unrecognized and unrecorded as he did them quietly with no desire for accolades.

Nathan and Vivian lived in Chicago, Philadelphia, Zebulon, and Little River, among other cities. Nathan was a devoted members of the Church of Jesus Christ of Latter Day Saints, for which he and Vivian served two full time missions and a calling as ordinance workers in the Raleigh North Carolina Temple for six years. Nathan was a founding member of the R.O.M.E.O (Retired Old Men Eating Out) Club. During the last few years of his life, Nathan gradually lost the ability to speak but continued communicating daily with his children and grandchildren via text messages. He loved to send and receive photos from friends and family. Many of his grandchildren looked forward to his daily inspirational texts and scriptures. He loved to laugh and joke and had a dry wit that he could use to diffuse any tense moment. Regardless of the circumstances, he could always make his family smile.

All who met Nathan knew him to be a kind and gentle man who loved his family. To his grandchildren he was known simply as “Gramps,” and his unconditional love and steady guidance made each one feel special and cherished. He has left them a rich legacy of faith, Christlike tenderness, and service that will continue to guide them on earth. Nathan grieved deeply when his young grandson Noah was called home to heaven in 2007. Every Sunday after family dinner, Noah would grab Gramps’ hand and excitedly say, “I get my shoes and go with you.” In the wee hours of Saturday morning on November 9, Gramps took his shoes and went with Noah. As peacefully and quietly as he lived his life, Nathan slipped through the veil of this mortal existence, where we have no doubt he heard his beloved Savior whisper, “Well done, my good and faithful servant.”

His passing has left a gaping hole in the hearts of his family, but his legacy of love will remain in their hearts forever!

Funeral 11 am, Tuesday, Church of Jesus Christ of Latter Day Saints, Zebulon Ward with visitation from 10-11 am, prior to the service. Burial, Gethsemane Memorial Gardens. Arrangements are with Strickland Funeral Home & Crematory, 211 W. third St., Wendell.