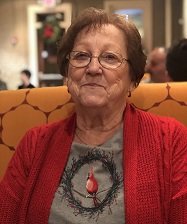 On Thursday, December 17, Mary Evelyn Hammond, loving mother and grandmother, passed away at the age of 86 after a short battle with COVID-19. She was loved by many and will be missed by them all.

Mary was born in Monterey, K.Y., on July 18, 1934, to Hiner and Pearl Thomas. She married Chester (Chet) Ray Hammond (decd.) on December 16, 1950. She was a dedicated mother to her three boys, Tom, Denny, and Jim, and worked hard at home to make sure they were taken care of.

Mary was an avid sports fan. She loved her Kentucky Wildcats and later adopted the NC State Wolfpack as her hometown team when she moved to North Carolina in the 1990s. But no team had her allegiance more than the ones her sons played on while they were growing up. She would often be the loudest voice hollering from the stands if a call went against one of her boys. She was also an excellent golfer and was a member of Warwick Hills Country Club in Grand Blanc, M.I. and Pinewild in Pinehurst, N.C. She and Chet would play golf almost daily early in their retirement and when their sons could make it, they always had a home course with them.

Mary could light up a room with her smile and never once met a stranger. She loved talking to people and learning about their lives. She was classy, dignified, and loving and would do anything for her family and friends.

Mary was preceded in death by her father, Hiner; her mother, Pearl; her husband, Chet; her brothers Eric and Fred; her sister, Louise Dickerson; her son, Jim; and her son, Tom. She is survived by her son, Denny; her brother, Jim; her daughters-in-law, Nancy and Jeanette; her grandchildren Amy, Kevin, Sara, Steven, Justin, and Olivia Starkey; step-grandchildren Shelli Rowland, Danielle Hoop O’Dell and Derrik Hoop; and several great and great-great-grandchildren.

Mary loved animals. Until late in life, she always had a dog or a cat with her. She was passionate about animal welfare and often donated time and money to that cause. In lieu of flowers, please consider donating to the Owen County Friends of Animals (http://ocfa.weebly.com/donate-here.html).

A memorial service will be held in late Spring 2021 in Monterey, K.Y.