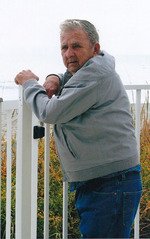 WENDELL – Luther Shields, 75, of Zebulon passed away on Sunday, September 11, 2011, at his home in the company and care of his beloved wife of almost 24 years.  He was born in High Point to the late Bertha Preston & William Clinton Shields.  He was of Cherokee American Indian descent.  Luther served in the U. S.  Army, U. S. Air Force and U. S. National Guard.  He served in an Army bomb dismantling unit while stationed in Okinawa, Japan.  For 25 years he was a Special Deputy with the Forsyth County Sheriff’s Department in Winston-Salem, with a rank of Sgt.  After moving to Eastern NC he worked at North Ridge County Club as a security officer.  After retirement he worked with Waste Management, Wendell Site.  He and his wife Donna were Deputies together before marriage.  Luther enjoyed the outdoors and nature.  He had a favorite pet Dutch Bunny named Speedy.  He also enjoyed watching the hummingbirds while sitting on his front porch and from his hospital bed.

A private memorial will be held at a later date.