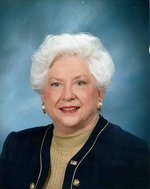 WENDELL – Lois Underhill Bullock, 75, of Wendell passed away suddenly on November 25th at Wake Med Hospital surrounded by her family.

She was born August 3, 1936, to James Milton and Annie Mae Johnson, who preceded her in death. She is also predeceased by husband Robert (Bobby) Underhill, sisters Elizabeth Brooks Parker and Bertha Medlin, and brother James Johnson.

Lois overcame many health problems, beginning at birth. She was a twin and weighed just over two pounds. Her infant brother George lived only a few days but Lois survived despite those early odds. Her childhood was spent in Raleigh but she felt fortunate when the family moved to Wendell. She attended Wendell High School where she was a cheerleader and a majorette. She married Bobby Underhill of  Wendell and they raised three children in the town they loved.

After her children were in school, Lois became a real estate agent and later a broker with her own company, Underhill Real Estate in Wendell. She worked long hours and went out of her way to help people get into a home of their own. She said “I didn’t sell houses; I sold homes.”

She survived a car accident which kept her bedridden for over a year but it didn’t keep her from accomplishing things. She continued to run her business by telephone with the help of loyal agents and friends. When she graduated from her hospital bed to a wheelchair, she redecorated her house. “I used a telephone and catalogs,” she said.

During her long convalescence she watched a mother duck who nested outside her window until the ducklings hatched. Elated, she called everyone she knew to announce the long anticipated births. When the mother duck led the babies into Lois’ swimming pool, they were stranded. Lois  hobbled out to the pool with a crutch in one hand and a camera in the other. The ducklings were unable to get out of the pool so Lois used an inflatable float as a ramp and watched as the babies marched out of the pool and followed their mother across the road to the pond.

She cared about people and all God’s creatures. She worried about stray animals and birds. She and her husband Buck sat on their screened in porch and watched a fox every evening at dusk as it played across their back yard. She once took a hoe to a snake in one of her bluebird houses and declared “You won’t kill another baby bird.”

She loved her family and friends but she had a special love in her life. That was Dinky, a four pound Maltese who sat on her bed all the months she recovered from her accident and was her constant companion for eight years. She said “Dinky loved me more than Peter loved the Lord.”

Despite declining health in recent years, Lois remained involved in church and community activities. She was a member of Wendell Presbyterian Church and Wendell Woman’s

Club. She hosted a Bible study group in her home and enjoyed reading with a special interest in American history. One of her fondest memories was attending the Watergate hearings while on a visit to Washington, D. C. She also traveled to the Holy Land and England. She enjoyed the North Carolina beaches, particularly Atlantic Beach and more recently Bells Island.

She loved cooking holiday dinners for her family, insisting on including each person’s favorites   resulting in at least a dozen dishes and multiple desserts. She enjoyed her home and decorated for every season. Always moving forward, she enjoyed reading on her new Kindle and researching interests on the internet.

For a woman who wasn’t supposed to survive, Lois lived a full life. She will be missed.

The Family will receive visitors at the home, 101 Jake May Drive in Wendell from 2 – 4 p.m. on Sunday, November 27th.  Services will take place Monday, November 28th at  Presbyterian Church at 11 a.m. on Monday.  Burial, Central Baptist Church Cemetery.