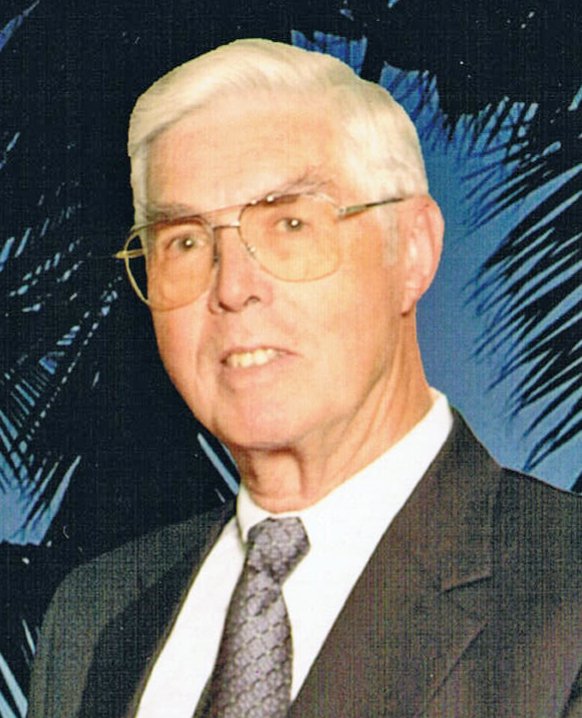 WENDELL – Lionel Northwell Hicks departed this life at age 89 on September 12, 2017. Visitation with the family will be on Friday from 6-7:30 pm at Strickland Funeral Home, 211 W. Third St. Wendell. Lionel was born on February 19, 1928 at his home in Wallace Virginia. He was the son of Dr. Harry H. Hicks and Bertha Francis Crumley Hicks.

He was preceded in death by his first wife of 49 years, the late Dorothy Lee Horner Hicks, as well as his father, mother, three brothers & four sisters.

He is survived by his second wife Norma Bridges McGee, his son, Jeffrey Northwell Hicks, his granddaughter, Ashley Elizabeth Hicks, his step-son, Norman Truett McGee, his step-daughter, Delia McGee Wood & his step-grandson, John Raymond Freshwater IV, all of whom he loved very much.

Lionel served in the U. S. Navy during World War II and used the GI Bill to obtain a degree in Electrical Engineering from Indiana Institute of Technology after his discharge. After graduation he was employed by the General Electric Company where he worked on the first atomic submarine (Thrasher), the Minute Man Defense System, the Saturn Rocket, the Pershing Missile System and the launch vehicle that put the first US Astronauts into space. After leaving General Electric he worked for the Veeder Root Company where he was Manager of Manufacturing Engineering at their Elizabethtown NC plant until he was transferred to their Dundee Scotland UK operation where he served as plant manager for two of their three plants. On returning to the United States he joined Grimes Aerospace Company where he was involved in the manufacture of parts for most commercial and military aircraft including the Stealth B-2 Bomber and the Stealth Fighter.

He loved to travel. With his family and friends, he has visited all 50 states plus Canada, Mexico, England, Scotland, Wales, France, Belgium, Netherlands, Germany, Holland, Denmark, Russia, Portugal, Spain, Italy, Greece, Turkey, China, Brazil, Chili, Peru, Nicaragua and Egypt where he visited the pyramids, climbed Mount Sinai and watched the sunrise where it is believed God gave Moses the Ten Commandments. Of greatest importance, Israel where he entered the tomb where it is said that Jesus Christ the Savior was laid to rest after he was crucified.

He had a varied and interesting life. He always said that what was important to him, was what he did for others. He believed in a spiritual life after death and quoted lines from the following poem, often adding his own thoughts and words.

Do not stand by my grave and weep, I am not there. I do not sleep, I am the wind of the morning breeze. I am in the sunshine filtering through the trees. And while I am gone, I am still here. And when you need me I will be there by your side, to protect and guide until we are together again.

In lieu of flowers, please make a donation to a charity of your choice.