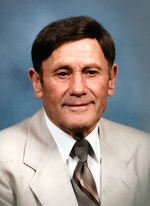 WENDELL – John Wilson Davis, 96, died Sunday with his beloved daughter at his side.  John was born and raised in Wendell where his homestead still stands on Cypress St. today.  He was son to the late John William & Sudie Worthington Davis.    He spent his early life helping in his fathers butcher shop where he delivered meat on his bike.  John retried from Helms Motor Express and then worked for Bucks Service Sation for many years.   He lived in Wendell until he was 87 and then went to Fayetville to live with his daughter and son-in-law.  He loved Wendell.  He was preceded in death by his wife, Mary Louise Long Davis, siblings, Lyman Davis, Helen Fredere, Lorena Wall, & Lethia Hinnant.