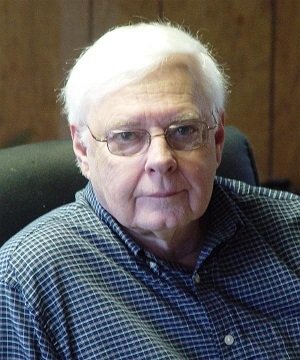 John Curtis Todd, 81, passed away on Tuesday evening following a brief illness.  He was at peace, surrounded by family.  John was born in Columbus, Georgia to the late Mallie Curtis and Ernestine Murphy Todd.  He began his broadcasting career in high school in the 1950’s.  In 1963, he earned a Bachelor of Arts degree in Religion from Atlantic Christian College (now Barton College) with a minor in Art.  In college, John and his cousin, Todd Holmes who was also an Atlantic Christian College student, built the College radio station together.  In June, 1962, John married Ann Lambeth Todd, and they remained soulmates for the rest of his life.  They had three daughters, and celebrated their 60th wedding anniversary in June of this year.  In the mid 1960’s while working for WPTF Radio, John was promoted to Program Director for WPTF-FM Classical Radio Station in Raleigh.  While at WPTF-FM, John created and began producing a 30-minute program, “The Greatest of These,” in which he read inspirational poetry set to music.  In response to that program, and the fact that he held a Bachelor of Arts in Religion, his denomination, The Christian Church (Disciples of Christ) in North Carolina decided to set aside for him a special commission.  On March 14, 1971, he became Regional Minister of Broadcasting for the Christian Church in North Carolina.  It was the first such commissioning in North Carolina for that denomination and perhaps any denomination.  In 1973, John switched from radio to television, moving to WRAL TV in Raleigh as an announcer and news reporter.  While at WRAL, John also produced commercials, but his specialty became producing creative feature stories.  In 1979, John moved his family to Winston-Salem where he served as General Manager to build a new TV station.  When the new station was up and running, the family moved back to Raleigh where John helped set up another news station, WLFL in Durham.  WLFL was later moved to Raleigh where John continued to work, holding many different positions, until his retirement in the early 1990’s.  After retirement, John and Ann founded and ran Anmar Productions to give field experience to local aspiring actors and film-makers.  During this time, John realized he needed music for his movies, but due to copyright laws, it was difficult to obtain.  John, who was not musically trained, bought a keyboard and began composing and performing his own music for the 12 films the company produced.  Today, John’s original music still continues to be distributed world-wide.  His legacy also includes serving as the official sound/audio recorder for the North Carolina Symphony throughout the 1960’s and the 1970’s, and 10 years as an official filmer/producer of the North Carolina Senior Games.  Along with all of his other responsibilities, John continued his childhood hobby of model railroading.  John never lost his good spirit or sharp wit, a trait he shared with his 3 daughters who, when younger, delighted in taking artistic liberties with his train layouts while he was away, then would await his reactions to their “modifications.”  John is survived by his wife, Ann Todd of the home, his daughters Kay Peedin (Merle), Angie O’Neal (Tim), Martie Sirois (Matt), 5 grandchildren, one great-grandchild, and his beloved rescue dog, “Millie.”

Visitation will be at Wendell Christian Church, Saturday, September 24, 2022, 10:00 a.m. with Memorial Service at 11:00 a.m., followed by Inurnment at Greenmount Cemetery.