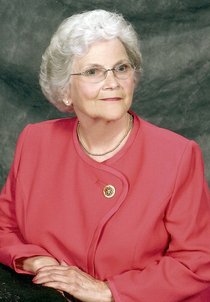 Jo Ann was born October 18, 1931 in Wake County, the 10th of 12 children to Tommy and Iva Williams.  Her last surviving sibling is Phoebe Pace of Zebulon.  She lived most of her life in Zebulon until her health necessitated relocation to be nearer to her daughter.  Jo Ann graduated from Wakelon School and continued to enjoy the friendships of her surviving classmates who still meet together as often as possible.  Following her high school graduation, Jo Ann began a career in State Government, retiring from the Department of Transportation in 1991 following 40 years of service.

Jo Ann was married to Houston Vaughn for 40 years until his death in 1993.  She is survived by their three children, Nelson Vaughn of Smithfield, Neal (Shawna) Vaughn of Zebulon and Lori (John) Carter of Winston Salem.

She was affectionately known by her grandchildren and great-grandchildren as Grandma, Grammy Jo, or JoJo, all of whom she loved dearly.  Brandon (Amber) and Brian (Tammy) Vaughn, Evan, Colin, and Alec Vaughn, Lisa Carter, Ashley Rockwood, and Jeff VanHove.  Great grandchildren Breyanna, Hannah, Kathryn, and Greyson Vaughn.

She was a lifelong member of Wakefield Central Baptist Church where she taught Sunday School and was a Girls in Action leader.  She also served on various committees as long as her health permitted.  Besides being the best mother she could be, Jo Ann was able to accomplish another lifetime goal by traveling to the Dominican Republic on two mission trips.

Jo Ann was a volunteer at Wake Med – Raleigh and Zebulon campuses for many years.  She was also a dedicated member of the Carolina Mudcats Booster Club.

In addition to her family, Jo Ann leaves behind many beloved nieces, nephews, and a legion of friends that she loved during the many chapters of her life.

Our family expresses their deep appreciation to the many friends and professionals who cared for Jo Ann and us during her prolonged illness.  Flowers are welcomed or memorials can be made to the Zebulon Area Rescue Squad or to Wakefield Central Baptist Church Building Fund.

Funeral services on Tuesday, August 12 at Wakefield Central Baptist Church at 2:00 p.m. with burial to follow in Gethsemane Memorial Gardens