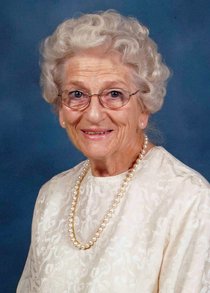 ZEBULON – Jewel Stephenson Vinson,  Age 92,  passed away peacefully at her home in Zebulon, on November 30, 2016. Her three surviving children, Joseph Stephen Vinson, Angela Vinson Jones, and Pam Vinson Aldrich;  four devoted caregivers, Melinda Deans, Nancy Medlin, Vickie Wylie, Kim Parrott, and an attentive team of Hospice nurses were closeby  to offer comfort and attend her every need as she prepared for her journey into heaven for a reunion with those gone before her:   Adoring husband, Joe, and youngest son, David; sister, Madeline Peele; parents, Pearl and Hal Stephenson, along with many other family and friends. She was a  resident of Zebulon and  member of Zebulon United Methodist Church for more than 50 yrs.

Jewel was born and raised  a farmer’s daughter in Johnston County. She met the love of her life on a blind date arranged by the couple’s best friends following a highschool baseball game, after which the pair was inseparable, except for a Military Tour of Duty for Joe in Korea in WWII.  She received her training as a Registered Nurse at Rex Nursing School in 1944, then practiced nursing for a number of years at the old Rex Hospital.  Joe and Jewel Vinson had been married 61 years when Joe died in 2006.  They often spoke of the pleasure they felt from  working side by side for more than 35 years at their store, Vinson’s Pharmacy, where they became well-known for giving their customers an extra measure of old fashioned personal service, and for helping to enhance the number and diversity of medical professionals making Zebulon their home.

Joe and Jewel were devoted to their family and spent  much of their golden years caring for youngest son, David, who fought an amazing battle with brain cancer until his death in 2008. There were no limits on what they would do for their family and many friends as they modeled integrity, generosity, a high standard of work ethic, and kindness to all who knew them.  Their lives were an inspiration to all, personally and professionally.

Jewel Vinson was a stellar example of a great mother, patiently encouraging her children to think independently and work hard  to achieve carefully thought-out life goals; a great wife, perfectly suited to be the helpmate and encourager needed by her husband; and a great friend, always willing to help in any way possible, without desiring notice or credit,  to encourage, and offer an easy smile whenever needed.  She will be missed by many and her example will keep her memory alive for those blessed to have known her.

In lieu of flowers memorials may be made to Heartland Hospice.