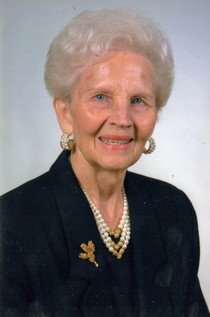 ZEBULON – Jemaria (Jo) Ward Stivers Tongue was Born December 16, 1922 in Franklin County, NC to the late Claude Gillam & Linda Ray Lewis.  She graduated from Bunn High School & Attended NC State.  Jo was an entrepreneur of many trades.  She was employed by the Army Signal Corps in Washington, D.C. during WWII.  She married T.B. Ward August 1, 1942 and spent time in Japan and Aberdeen Proving Grounds, MD where she gave birth to Jackie Bradford Ward on July 16, 1952.  After being a military wife for 15 years, the family moved to Saudi Arabia due to T.B.’s employment with ARAMCO where Jo was a part of a major milestone; starting the first girl’s school in Arabia, through the woman’s club. She was the hospitality chairman for new ARAMCO employees coming to Saudi Arabia as well as teaching the Saudi women health and hygiene. She later was employed by the ARAMCO dental clinic.  In 1971, the family returned to Zebulon and purchased the Clifton Daniel home. After the death of her husband in 1974, Jo joined the Peace Corps/Vista.   She received the Town of Zebulon Citizen of the Year Award.   Jo saw a need for an African American Beauty Shop in Zebulon, resulting in her opening “The Black Powder Puff”.  Jo was always an active member of the Church. She was involved in the Woman’s Club in Saudi Arabia and served as the Vice President of the Zebulon Woman’s Club.  She opened “The Side Door” consignment shop in the late 1970’s.  She worked as the Activities Coordinator at Guardian Care Skilled Nursing Facility.  She was employed by NC Department of Human Resources as an Ombudsman, an advocate for long term care, being responsible for 6 counties.   Jo aided in the building of the Wendell Senior Center. She was an Elder and a Deacon at Wendell Christian Church, and was also involved in many more ministry activities.

In lieu of flowers memorials may be made to either Zebulon Baptist Church Faith Challenge or Wendell Christian Church.

Funeral service 11:30 am, Saturday, Zebulon Baptist Church with visitation from 10-11:30 am, prior to the service.  Burial will be private for the family.