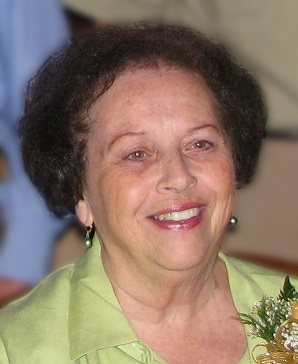 On Friday, May 1, Jacqueline Simpson Alphin went to be with her Heavenly Father after being critically ill for several weeks.

Known as Jackie by most, she was usually the quietest person in the room. But she was also the person who was the most caring and the most generous. And, when persuaded, she could set a keyboard ablaze like no one else with tunes like Boogie Woogie Bugle Boy and others she had learned to play by ear over the years. Some of the fondest memories friends and family have of Jackie include gathering around the piano and singing as Jackie played effortlessly and joyfully.

Jackie brought so much love and compassion into this world and shared it with everyone and everything. She adored her husband, Jay, who was the absolute love of her life. “Toots” was her name for him and she knew that she could always depend on him to be right by her side. And he was. Together, they had a beautiful daughter, Terry, who became an amazing woman. They were so proud of all she achieved during her time in this world.

Jackie loved her three sisters—Louise, Linda and Patsy—dearly. The four of them together were a force of nature and the bond they’ve always shared remains unbreakable. She also loved and doted on her nieces, nephews, great nieces and great nephews, treating all of them as if they were her own children.

Outside of her family, Jackie’s passions included flowers, animals, Elvis, and her beloved Carolina Tar Heels. She always had a story to tell about a cat or dog she had taken in and was caring for. They brought her such joy and, with her, they found a forever home filled with love. As for Jackie’s Tar Heels, they brought out a fire in her that few other things ever did. Nobody has ever pulled so hard for a team to win or felt so bad when the final score favored the opponent. But she was a fan come rain or shine.

Jackie was, by nature, shy and demure—but her spirit was and remains so very, very strong. She has left an indelible mark on this world and on the hearts of all who know and love her.

Jackie was preceded in death by her parents, Jack and Lola Simpson; her daughter, Terry; and her sister, Louise. She is survived by her husband, J.H. Alphin III; her sisters, Linda Lashley and Patsy Laws (Tony); and by a whole host of in-laws, nieces, nephews, great nieces and great nephews.

Due to the COVID-19 pandemic restrictions, the family will hold a private graveside service for Jackie. In lieu of flowers, donations can be made in Jackie’s name to the Wake County SPCA.