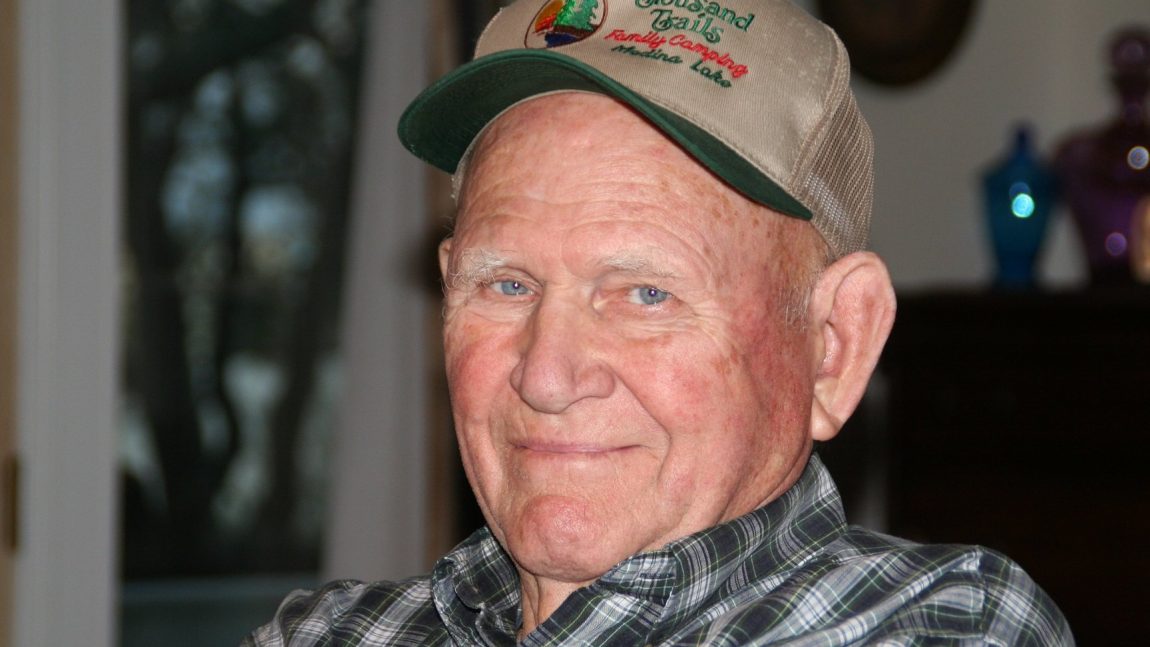 ZEBULON – Harold Bunn (Cotton Top), 90, passed away on August 17, 2017 in San Antonio, TX. He was born on January 22, 1927 in Zebulon, NC. He was the husband of Juanita Driver Bunn for 70+ years. He was the son of Edwin and Lucy Bunn. He is predeceased by his parents and sister Helen Dickerson and brother Jim Bunn. He is survived by his loving wife, daughters Sue Baird (Tony) of Zebulon, Emily Forysth (Mike) of San Antonio, TX, son Eddie Bunn (Sherrel) of Wilmington, NC, grandchildren Gina Bunn of Zebulon, Jason Bunn of Mooresville, Melissa Bunn of Parkton, great granddaughter Chelsea Bunn of Zebulon, his extended family of 7 step-grandchildren and 9 step-great grandchildren, and nephew Marty Dickerson (Marti) of Pinehurst.

He retired from Telex Technology after many years of service. He and Juanita were considered a legend at Camp Clearwater at White Lake, NC beginning in the mid-1960s through the 1980s in their camping years of family and friendship times. They enjoyed riding motorcycles with friends, to include rides to Niagara Falls, Canada, Tulsa OK, Florida and Texas. In 1992, they bought their first motor home and traveled extensively throughout the US. Although continuing to travel, they retired and made their home in San Antonio, TX. Harold was an excellent player of cards, and enjoyed many card games with family and friends.

Harold and Juanita were featured in the Thousand Trail magazine (for Medina Lake, TX) where they renewed their vows and celebrated their 65th and 70th wedding anniversaries. The magazine noted “Harold and Juanita Bunn have been members for over 20 years. They are family to all of us here at Medina Lake. They join us every weekend and no one walks through the door without feeling at home thanks to Harold and Juanita.” At their 70th wedding anniversary – they received letters of congratulations from President George H. W. Bush and Mrs. Barbara Bush, from Governor Greg Abbott of the State of Texas, from United States Senator Richard Burr of North Carolina and from Vice President Dan Perlis of Thousand Trails Campgrounds.

Harold was a member of Life Oak Baptist Church of San Antonio. He was a faithful member of the Wakefield Central Baptist Church in Zebulon and was an original member that gave his labor to help build the church .

Harold was very proud of his wife (who he said he did not know what he would do without her) and was very proud of all of his generations of children. He was an extremely hardworking, handy man, enjoyed his garden and a very positive person who was always ready to help someone. He had a wonderful laugh and will be greatly missed by family and friends.

Funeral service will be Tuesday, 2pm, August 22, 2017 at the Wakefield Central Baptist Church, 308 Proctor St., Zebulon, NC with visitation from 12:30 – 2pm, prior to the service. Burial will follow at the Zebulon Town Cemetery.

In lieu of flowers, memorials may be made to Wakefield Central Baptist Church, 308 Proctor St., Zebulon, NC 27597. Services have been entrusted to Strickland Funeral Home, Wendell, NC. Condolences can be made at www.stricklandfuneral.com