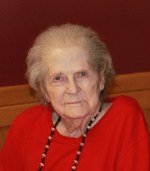 ZEBULON, N C  – Gladys Correll Fleming, formerly of Landis, passed away peacefully on July 11 at Guardian Care of Zebulon after a period of declining health.  Gladys was born in Cabarrus County on September 8, 1921, the youngest daughter of Phifer and Lucy Eddleman Correll.  Gladys was a graduate of J. W. Cannon High School Class of 1938 and a lifelong member of St. John’s United Church of Christ in Kannapolis.

In addition to her parents she was preceded in death by a sister, Louise Correll Long of Mooresville.

Survivors include Ben Fleming, her loving husband of 70 years, a son, Eddy, of Knightdale, a daughter, Bonita MacLeod and her husband John, of Wendell, five grandchildren, 11 great-grandchildren, a sister, Hazeleen Correll Price, of Landis, and a special aunt, Kathleen Correll Pethel, of Kannapolis.

Gladys was a loving daughter, sister, wife, mother, grandmother, great-grandmother and friend and will be missed by all who knew her.

A memorial service for Gladys will be held 2 pm, Thursday, July 19, 2012, at St. John’s United Church of Christ, 901 North Main Street, Kannapolis.  Family visitation will immediately follow that service.  In lieu of flowers memorials in memory of Gladys may be made to the church or to a favorite charity.

The family would like to thank the staff at Guardian Care of Zebulon for the very loving care they provided Gladys while she was a resident there for the past five years.