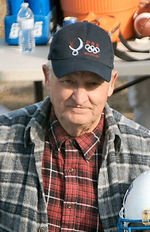 ZEBULON –  Gene Fuller, 74, died unexpectedly Thursday at UNC Hospital.  A native of Johnston Co., he was son to the late James Barbee & Mollie Morris Fuller.  Gene was retired from Fred Whitaker Co. after over 40 years of service.  Gene was a man who cared about his community, loved gardening, coaching, hunting rabbits, fishing and was a man of the woods. His grandchildren were his eye and time with them was his favorite way to spend his day.

In lieu of flowers memorials to Wakefield Central Baptist Church, Building Fund, or a charity of choice are welcomed.