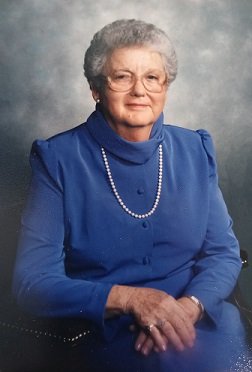 Eva Jane Frady Liles died peacefully in her home on Sunday, October 4, 2020. For Eva, Sunday was always a day for worship and for family, and her long and joyous life was a testament to those things. She was born on May 19, 1926, in Wendell, NC; she was the sixth and youngest child of Oliver Van and Ollie S. Frady of Asheville, NC.

Growing up in Asheville during the Great Depression, “Eva Jane” later moved to eastern Wake County where she attended Wendell High School and met Jack White Liles, from the rival school Wakelon. After he returned from service in the Air Force (bringing the Chinese silk that would be used for Eva’s wedding dress), they married in 1946 and made their home in Zebulon. She attended Atlantic Christian College and worked as a bookkeeper and executive secretary before running the Zebulon Chamber of Commerce from 1995-2005. She also directed weddings, coordinated the Zebulon Christmas Parade, and led the preschool choir at the Zebulon Baptist Church, where she was a longtime member. She had a song for every situation and never met a stranger she couldn’t make her friend.

After her beloved husband’s death in 1966, “Miss Eva” was sustained by her commitment to community, family, and friends, from serving in the Zebulon Lions Club Auxiliary to her weekly bridge clubs (where she was a dominant player into her nineties) and annual Christmas Eve parties. Eva also served two terms as a town commissioner for Zebulon and as mayor pro tem, bringing business and entertainment to her community through her support of the Carolina Mudcats, who asked her to throw out the ceremonial pitch at their first game. Going out to eat with her in Zebulon was like going out with the Queen; she knew everyone and everyone knew her. In acknowledgement of her contributions to the town, in 1991 she received Zebulon’s Citizen of the Year award, and she was recently featured in a documentary film on Zebulon memories by Preservation Zebulon.

Eva loved travel and loved meeting people; after her husband was stationed in Hawaii during World War 2 but died before he was able to take her there, she carried out his promise and took her extended family in Jack’s memory. She adored the mountains around Asheville, where she lived until third grade, and always wanted to see the rhododendrons bloom in spring. She also loved visiting the beach with her family and her college friends. Her work took her to South America; with her family, she drove across the United States and visited London and Paris. Every day was an adventure for Eva, a chance to laugh, tell stories, and make new friends. She kept her wit and wonderful sense of humor to her last days, showing nurses at the hospital a picture of her at nineteen and challenging them to ‘make her look that way again’!

She was preceded in death by her much-missed husband Jack and is survived by her devoted children Lewis (Karen) and Beth; her grandchildren Jill (Joe), Matt (Nan), Meredith (Oscar), and Capt. Logan Liles; and her great-grandchildren Jack, Emmett, Teddy, and Wells. To them she was simply Ahmama, a constant loving presence and an indomitable spirit.

Eva is also survived by a caring extended family of nieces, nephews, grand-nieces and grand-nephews, and cousins; by the nurses, doctors, and caregiver, Diane Burrell, who looked after her; and by her many friends of all ages who were always family to her. Her life reminds us that change starts in our own communities and neighborhoods, and that serving others through love is the highest calling.

A memorial service will be held at Zebulon Baptist Church on Friday, October 9 at 11am and streamed online. Flowers are welcomed or memorial contributions can be made to Zebulon Baptist Church Youth Choir Program or Preservation Zebulon (214 E. Horton St. Zebulon, NC 27597).   Eva will lie in repose from 3:00 to 5:00 pm Thursday, October 8 at Strickland Funeral Home & Crematory.

A retrospective on Eva Jane Frady Liles’ wonderful life can be read at the Preservation Zebulon website.