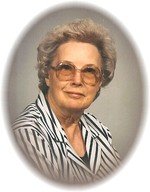 ZEBULON – Estelle Richards Jones, 96, of the Pilot Community, went to be with her Lord on Saturday.  A native of Wake County she was daughter to the late Buck B. & Nellie Robertson Richards.  She was preceded in death by her husband of 46 years, Mr. William Y. Jones.  She was also preceded in death by her children, Phil Richards Jones  and daughter, Patricia J. Gebbie,  & brothers, Woodrow, Baxter, & Fernie Richards & 1 great grandchild.

Flowers or memorials to Union Chapel Baptist Church are welcomed.

Funeral service will be 2 pm, Tuesday, Union Chapel Baptist Church, visitation 1 hour prior to the service.  Interment in the church cemetery.