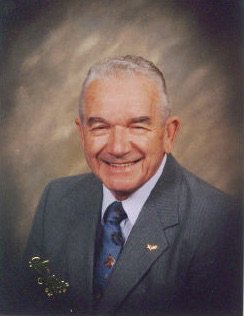 SMSGT Elmer Carl Bryans, devoted husband, father and friend, age 87, died peacefully at home with his family by his side on December 26, 2017. He was born in Roberts, Idaho on October 6, 1930 to the late Edward “Ted” & Minnie Wolfe Bryans. His mother’s involvement with the Salvation Army gave him a generous nature that he employed helping others throughout his life. He joined the United States Air Force in 1949 and served honorably as a communications specialist for 20 years, many of them overseas in Morocco, Okinawa and England. His service included roles of communications, leader, mentor and recruiter. With typical dedication and drive, in more recent years he developed and served in the role of volunteer director of retiree affairs at Seymour Johnson Air Force Base in Goldsboro. His wife of 65 years also served in the Air force where they met while working together in California.

After retiring from the Air Force, Elmer had several more careers including Insurance salesman, entrepreneurial owner of an antiques business with his wife, clock restorer, and a highly successful 17 year career with computer giant, IBM, working in the Sales organization.

His interest with antiques and clocks began while serving in England where he was mentored by an expert Clock man. He generously shared his knowledge as the long time president of the Mid-Hudson Valley Clock Club in the 1980’s.

Elmer’s leadership, good humor, fun and generous spirit and Christian charity will be fondly remembered by all that knew him.

He is survived by his beloved wife, soul mate and best friend, Arlene Osinga Bryans and their daughter, Ruthann Walton & her husband, Frederick, all of Wendell. He is also survived by several nephews and a niece. He was a member of the Covenant Presbyterian Church in Wendell.

A graveside memorial service with Military Honors will be held at Arlington National Cemetery at a later date.