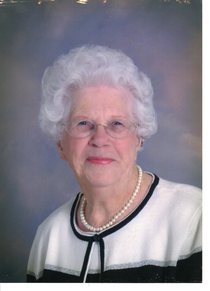 Elizabeth Burke Horton, 98, passed away surrounded by family on Friday, September 9, 2016, at Zebulon Rehab. Born on October 23, 1917, she was the daughter of the late Tomie and Genie Goldston Burke,  Goldston, NC.

In addition to her parents, she was preceded in death by her loving husband Robert Edd Horton, to whom she was married for over 57 years; an infant son, Samuel Barbee Horton; her daughter, Jean Elizabeth Horton; two sisters and five brothers.

She was a member of Zebulon Baptist Church for 76 years where she worked faithfully in the Beginners Department and as a supervisor in the nursery until she joined the Fellowship Class.  She was a faithful member of this class and dearly loved her teachers and fellow classmates.

She was also a long-time member of the Zebulon Lions Auxiliary.

Flowers welcomed or memorial donations may be made to the Zebulon Baptist Church’s FAITH Challenge, P. O. Box 366, Zebulon, NC 27597.

Funeral services will be Monday, September 12, at 11:00 am, Zebulon Baptist Church, Zebulon. Burial will follow at Gethsemane Memorial Gardens.

Visitation will be Sunday, September 11, 2016, from 2 – 4 pm, at Strickland Funeral Home, 211 W. Third St., Wendell.  At other times, the family will receive friends at the home of Rebecca Horton Hinton, 409 South Arendell Avenue, Zebulon.   www.stricklandfuneralhomes.net