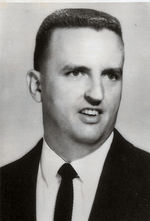 SELMA – Edward “Sandy” Bagley, Sanderford, Sr., 80, died Wednesday.  A native of Cumberland County he ws son to the late John Fenner & Ridley Walker Sanderford.  He was a veteran of the U. S Navy Medical Corps.  Mr. Sanderford was a retired from the U. S. Postal Service.  Sandy was always an advocate for others, believing people should go to extremes to help and be of service to their fellow man.  He also loved to bicycle.  He was preceded in death by a brother, John F. Sanderford.

He is survived by his beloved wife and friend of over 56 years, Elsie Pannell Sanderford of the home, son, Edward Bagley Sanderford, Jr., brother, Lewis Sanderford of Morehead City, and grandchildren, Benjamin, Valiree, & Luke.

In lieu of flowers the family requests memorials be made to Temple Baptist Church, 1417 Clifton St., Raleigh, NC, 27604

Memorial funeral service, 11 am, Saturday, Strickland Funeral Home Chapel, 211 W. Third St., Wendell, with visitation from 10 – 11 am, prior to the service.  www.stricklandfuneralhomes.,net