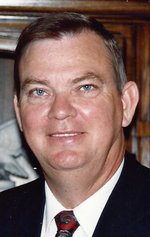 A native of Johnston County, Dr. Holt leaves a beautiful legacy of caring deeply for and counseling those around him.  He was a mentor and role model to many students, educators, family members and friends throughout his life.  As a boy, he had dreams of becoming a teacher and coach with a desire to inspire others to be the best they could be.  He set goals and, with drive and determination, was willing to do what it took to make his dreams come true.

He was pleased to have influenced and encouraged many young people through his dedication as a Little League baseball coach for nine years.  He went on to become a high school teacher, coach, principal, and assistant superintendent leaving a place in the hearts of those he touched in each role.  He was a master communicator with a talent for building bridges and connecting people from various backgrounds.  Creative problem-solving and the ability to remain calm and confident while faced with adversity were attributes that served Dr. Holt well as an educator.  He was a lifelong teacher and student himself, even working full-time while earning all of his degrees leading to his doctorate.

With a warm sense of humor, he was quick to tell a joke or make a witty comment that would bring smiles to the faces of those around him.  He always found time to lend an ear and offer heartfelt advice when asked.  He possessed a unique combination of passion and compassion for which he will remembered.

He loved his family and friends with steadfast dedication.  He was a loving husband, father, and grandfather, and he touched the lives of so many family members, friends and colleagues across the state of North Carolina.

Dr. Holt retired in 2004 as Assistant Superintendent of Human Resources for Franklin County Schools.  He continued to be an active board member of the United Way of Franklin County.  He served 15 years as a high school principal in Johnston, Jones and Harnett Counties. Prior to his administrative roles, he was a teacher and coach at Smithfield-Selma Senior High School. Before entering the field of education, Dr. Holt was Program Director and Morning Personality at WETC radio in Wendell-Zebulon.

Funeral services will be conducted at 3:00pm on Sunday, April 14, 2013, at Baptist Tabernacle Church located at 1599 NC Hwy 231 in Wendell.  Burial to follow at Gethsemane Memorial Gardens located at 809 West Gannon Avenue in Zebulon.

Dr. Holt is thankful for his personal relationship with our Lord and Savior Jesus Christ which guarantees eternal life.

The Holt family would like to express their heartfelt appreciation for all of your love and support during Dr. Holt’s illness.  He will be missed dearly every single day and we will cherish all of our memories with him.  His legacy of love lives on.