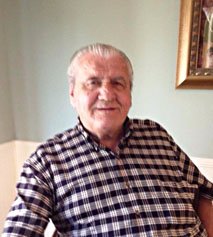 ZEBULON – Dewey Wayne Creech, 81, of 1084 Earpsboro Rd, passed away at SECU Hospice House on Wednesday, June 29, 2022. He was born in Johnston County to the late William M. “Will” Creech and Vonnie M. Allen Creech.  After growing up on the family farm, Dewey joined the Navy and spent 4 years on the seas.  He retired with 30 years of service with NCDOC.  Dewey loved his family with all his heart, especially the grandchildren.  In addition to his parents, he is preceded in death by his wife of 54 years, Patsy Hagwood Creech, stepson, Gerald Wayne Hagwood, brothers, Allen Edward Creech, Andrew Gordon “A G” Creech, William “Pete” Creech, Robert “Verlon” Creech, sisters, Christine Creech Andrews, Ada Mae Creech Hales and Hilda Faye Creech Phillips.

The Family wishes to thank all of the staff at SECU Hospice House for their care and compassion during Dewey’s last days.

Flower are welcomed or memorial donations may be made to SECU Hospice House.