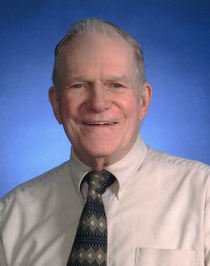 Born: 7/9/1934 in Honolulu, Hawaii to Eugene A. and Dorothea B. Reynolds. Grew up in Groton, Connecticut, served in the Navy on the U.S.S. G. D. Crow.   After his service in the Navy he moved to Milwaukee, WI., to attend the Milwaukee School of Engineering. There he met Therese Marie Havlik and they were married 4/12/1958 in LaCrosse, WI.  He worked for Allis-Chalmers as an electrical engineer in Milwaukee and in Racine, WI. In 1975 he moved with his family to Wichita Falls to serve as Customer Service Manager at Allis-Chalmers which later became Siemens.  In 1991 he transferred with Siemens to work as Customer Service Manager in Wendell, NC. Until his retirement in 2000.  He and his family lived near Louisburg, NC.  He was very proud to be the father of ten children. He died on Holy Thursday, April 17, 2014, at his home.

He is preceded in death by his wife, Therese Reynolds, his daughter, Wendy Graves, his son, James Reynolds, his grandsons, Matthew Johnson &  Jaron Laurell, and his sister Joan Slater.

A mass of resurrection will be offered 1 pm, Thursday at St. Eugene’s Catholic Church with interment to follow in Greenmount Cemetery.