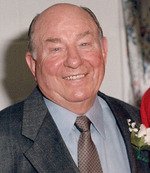 Clarence Donald Crowder, 87. of Hardy Road, Wendell, took the hand of Jesus and was taken to his heavenly home on Sunday with his family by his side.  He was born in Johnston County, son of the late Jim and Clyde Harris Crowder and was preceded in death by sisters and brothers, Ida Caudle, Mamie Binson, Gertie Whitley, Ruth Batten, Pauline Brooks, Vernon, Herman and J.P Crowder and his mother and father-in-law Geraldine and Roy Strickland.

Mr. Crowder served in the Navy WW 11 and then went on to serve in the Merchant Marines for 34 ½ years and retiring in 1985.

Funeral service will be 11 am, Wednesday, Union Hope Baptist Church with burial to follow in the church cemetery.

He is survived by his loving wife of 34 years Betty Sue “Pansy” Strickland Crowder, his daughter and son-in-law, Sheila K.  and Mike Adderholdt of  Nags Head, NC, his grandsons, Derek McCreary and D. Jennings Wescott and granddaughter, Whitney Adderholdt of  Newport News, Va. and his special family, Ray and Judy Harris of Greensboro, Bob and Mary Kraus of Oak Island, and Jimmy and Emma Harris of Wendell. Sister-in-law Lorina and Milton Jones of Bunn, brother-in-laws, Larry and Charlotte Strickland of Zebulon and Thomas and Joy Strickland of Wendell and a host of nephews and nieces.

Visitation will be 6-9 pm, Tuesday, Strickland Funeral Home, 211 W. Third St., Wendell, and other times at the home.  www.stricklandfuneralhomes.net