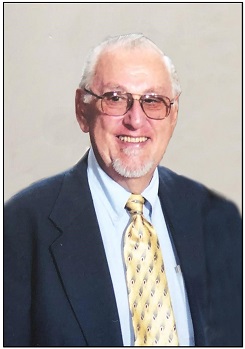 Chuck was baptized in the First Methodist Church, Beloit, WI in April 1931.  He spent his childhood and youth on dairy farms in southern Wisconsin.  Upon graduation in 1947, he enrolled at Rockford School of Business, Rockford, IL; graduating in 1950 with a Bachelors Degree in Accounting. He married Pauline F. Zimmerman on November 1, 1952 at St. John Lutheran Church, Beloit, WI where he had become a member by adult confirmation on August 31, 1952.

Charles took early retirement in April 1984.  However in July 1985 he accepted a position as General Manager of Towle Manufacturing headquartered in Boston, MA. In July 1987 he agreed to a new avocation, a consulting position for Los Angeles Lutheran High School in southern California, and other Lutheran High Schools in San Diego, Simi Valley and Laverne, and Northrop, MN.

Over the years of his marriage, he and Pauline moved 26 times, lived in 8 states, and been members of 16 Lutheran Church Missouri Synod (LCMS) congregations.

Chuck served in every elected office and board position in his local congregations.  He was Chairman of the Rocky Top Mission Counsel. He served in the LCMS Mid-South District on the Board of Directors, Mission Board, and Human Care Board, and the Board of Stewardship and Constitution Committee in Northern Illinois District.

Other activities Chuck was involved with include:

Funeral Service will be held Thursday, August 1st, 10 am, Strickland Funeral Home Chapel with visitation prior to the service.  Burial to follow, Greenmount Cemetery, Wendell.