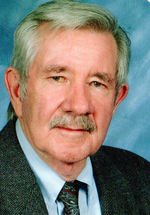 Wendell – With his wife and children at his side, Charles Thomas “Chuck” Ransbottom of Wendell answered the Lord’s call on Sunday, December 9, 2012. He was 76.

Mr. Ransbottom, the son of Margaret Pollard and Marion Ransbottom of Pittsburgh, Pa., was a veteran of the U.S. Coast Guard. In the late 1950s, Mr. Ransbottom’s USCG electronics training and analytical mind earned him a highly sought-after position with IBM that evolved into a 33-year career.  He retired in 1991.

In his early days with IBM, Mr. Ransbottom helped pioneer the emerging field of computer programming. He played a critical role in programming the control and onboard systems for the Apollo Space Program, culminating with Neil Armstrong’s historic moonwalk. His most publicly recognizable contribution was the “roll program,” which turned or “rolled” the speeding Saturn V rocket onto the proper trajectory for Earth orbit.

Later in his career, Mr. Ransbttom helped implement some of the world’s first computerized retail and banking systems, primarily in Europe, and worked in IBM’s Federal Systems Division, which provides computer systems to the U.S. government.

Mr. Ransbottom was passionate about literature, economics, politics and his country. His greatest interest, however, was his family; his joy in his children’s accomplishments eclipsed any pride he took in his own. He also was a member of Sacred Heart Catholic Church in Dunn.

He married his high school sweetheart, the former Marion Rita Schuster, in 1956. At the time of his passing they had been married 56 years. In addition to his wife, Mr. Ransbottom is survived by their three children, Bernadette Ransbottom Hearne of Browns Summit, N.C., Lisa Ransbottom Roner of Mansfield, Texas, and Joel Kevin Ransbottom of Stalllings, N.C.; his granddaughters Meghan and Shannon Roner of Mansfield, Texas, and Kaitlyn and Olivia Ransbottom of Stallings, N.C.; his sister and brother-in-law, Ruth and Gerald Boynton of Fredericksburg, Va.; his son-in-law, John T. Hearne, and daughter-in-law, Kelly Ransbottom; and six nieces and nephews. He was preceded in death by his brother, Jim Ransbottom.

Flowers welcome or memorials may be made to Sacred Heart Catholic Church, Dunn, NC