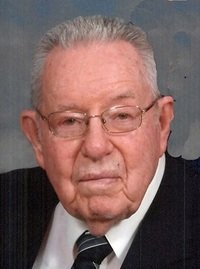 Calvin Washington Hood Sr. passed away peacefully Wednesday in Zebulon NC. Calvin was born on September 8 1924 to Charles Hood and Rebecca Maud Clay in Plateau NC. He is predeceased by his loving wife of 64 years, Merle T. Hood.

A veteran of WWII, Calvin proudly served in the US Army, 75th Infantry.  He received the Purple Heart for injuries sustained in Colmar France.  Upon discharge and return to the states, Calvin enrolled at NC State graduating in 1949 with a degree in Mechanical Engineering.  Working first in NC after graduating, he retired in 1976 from the US Army Corps of Engineers, Fort Belvoir VA., returning to NC that same year.  In 1979 he went to work for 22 more years, retiring from Froehling & Robertson in 2001.

Although he was an engineer his entire working life, Calvin’ s greatest joys were gardening and his family of 6 adopted children as well as foster parenting numerous children over the years with his wife Merle. Calvin was a devoted husband and father and a role model to all. A devoted Christian, Calvin was a dedicated 33 year member of Covenant Presbyterian Church in Wendell NC, taking on many roles through the years in service to the church. Calvin was also a long time board member of Barium Springs Children’s Home in Statesville NC.

Funeral services will be held 1:00 pm, Saturday in the Strickland Funeral Home Chapel, 211 W. Third St. Wendell, NC, 27591, with Pastor Bob Borland officiating.  The family will receive friends from 12:00 – 1:00 pm, prior to the service.  Interment will be follow in Gethsemane Memorial Gardens in Zebulon, Pastor Claude Wilson-Stayton officiating.  www.strickandfuneralhomes.net