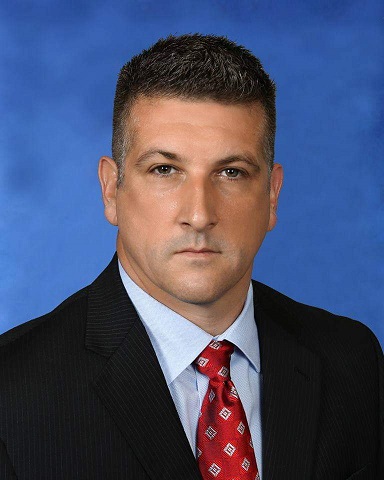 Brian Carl Sjostedt, 45, passed away on Friday, March 1, 2019.  He was born in Bridgeport, Connecticut, to Robert Carl Sjostedt and Linda Kendrick Sjostedt.  Brian, started his career in governmental service when he enlisted in the United States Marine Corps as a Stinger Operator in 1991.  His experience in the Corps was diverse while serving as an operator with infantry weapons platoons and integrating with air wing squadrons as an advisor to aviators on surface to air missile identification and evasion.    His experience included contingency missions in the former Yugoslavia, Somalia, and Haiti.  Following his four-year tour as a Stinger Operator, He was augmented into the Marine Corp’s Individual Augmentation Program as a Military Police Supervisor for three years.  Brian was honorably discharged from the Marine Corps in 1998 as a Sergeant.

He continued his public service as a Raleigh Police Officer from 1998 to 2005.  His police career mirrored the diversity of his Marine Corps career with numerous specialized assignments including Community Oriented Drug Enforcement Projects, Special Investigator on Inter agency Task Forces, and deployments as an International Police Advisor.

As an Inter agency Task Force Investigator assigned to the District Attorney’s Office, it was his responsibility to prepare high profile cases for prosecution by coordinating investigative efforts with the FBI, ATF, DEA, NIS, CID, Interpol, local, state, and global law enforcement agencies.  During his three year assignment as a DA investigator, he was responsible for the successful prosecution of North Carolina’s first Habitual Violent Sexual Offender case.

While serving in the Raleigh Police Department, Brian was assigned as an International Police Advisor for the United Nations mission in Liberia and US State Department Contingency Mission in Iraq.

He was later assigned as Security Manager and further progressed to Director of Operations for DynCorp’s Department of Defense contracts.  He was responsible for day to day operations and leadership of 100 US, 250 Third Country National, and 2000 Local National PSD personnel in Iraq for 15 months.

Brian founded Vetted International, Ltd. in 2005 and is a well-respected provider of War Hazard and Defense Base Act investigative services in Iraq and Afghanistan for the United States Department of Labor, Department of State and Department of Defense contracts.  His company is also responsible for contractor medevac and repatriation services, emergency medical care, and medical case management for injuries sustained from War Hazard Incidents.  Since its inception, Vetted International has grown its investigative capabilities to complete insurance claim investigations in North America, South America, Europe, Africa, and Asia.

He was a founding member of the Raleigh Blue Liners the N A Blue Hockey team.

He is survived by his parents, Robert Sjostedt and Linda Sjostedt.

In lieu of flowers memorials may be made to either combatwarriorsinc.com, the go fund me for Allison Forsythe, or www.capitalcitycrew.org.