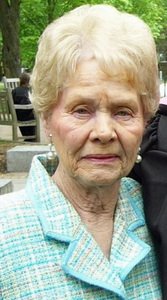 WENDELL   Betty S. Yeargin, 88, of Wendell, died peacefully on Sun-day afternoon, October 27 after a period of extended illness.  Born December 21, 1924, Betty Jean Slusher was the daughter of Chellis Ewing Slusher and Twila June Young Slusher  and grew up in Carthage, Illinois.  During World War II, Betty proudly served her country in the United States Marine Corps Women’s Reserve, stationed in Washington, D.C.  During her time in the ser-vice, Betty met and married her husband Paul Jones Yeargin, who was work-ing as a U. S. Army clerk.  They had one son, Gene, and eventually moved to Wendell, N.C. in 1952.  Betty worked for several years at the Bank of Wendell before becoming a full-time homemaker.  She was a member of Wendell Bap-tist Church and served the congregation in a number of duties over the dec-ades.  In her later years she enjoyed working part-time at The Flower Shop in Wendell and spending time with friends over coffee and breakfast at Aubrey & Peedie’s Grill on Main Street.  A devoted mother and grandmother with many wonderful friends, she will be missed by all.

In addition to her parents, Mrs. Yeargin was preceded in death by her husband Paul J. Yeargin and son Gene D. Yeargin.  She is survived by her daughter-in-law Carol C. Yeargin, grandson Benjamin P. Yeargin and wife Li-sa, with great-grandson Kirby G. Yeargin, all of Wendell; grandson Andrew H. Yeargin of New York, N.Y.; and brother L. Dean Slusher and wife Joan, of Safford, Arizona.