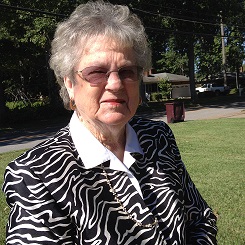 Ann Temple Brantley of Zebulon, formally of Garner, passed away peacefully on September 29, 2019, and is now resting at the hands of her Lord and Savior.

Ann was born to the late Edd Chalmers and Jennie Temple of Zebulon on July 14, 1932.  She was a devoted wife, mother, grandmother and great-grandmother.

Ann was a gentle soul, who loved to cook, find treasures at local flea markets and found the most joy when she was surrounded by her family. She had the ability to make anyone feel special with her sweet voice and big hugs.

She is survived by her four children: Steven Brantley (Kathy) of Wilmington, Kevin Brantley (Debbie), Kerry Brantley (Susan) and Robin Hicks (Glen) all of Zebulon. In addition, seven grandchildren: Shannon Winslow and Shane Brantley of Wilmington, Allen and Matthew Brantley of Zebulon, Beth Brantley Horner of Rolesville and Jeremy and LeAnn Hicks of Zebulon. Along with eight great-grandchildren: Christian, Macy, Avery, Pierce, Madison, Taylor, Andrew and Meredith. She is also survived by her sister, Barbara Lane of Virginia, brother-in-law, Bobby Brantley and a host of nieces and nephews.

Ann is preceded in death by the love of her life, Wallace Brantley, her parents and siblings: Allison Temple, Joseph Temple, Doris Pittman, Gordon Temple, Janice Batten and Wayne Temple.

A visitation for friends and family will be held October 2, 2019, at 11:00 a.m. at Union Hope Baptist Church, which is located at 12717 Hwy 97 in Zebulon for which she was a beloved member. A celebration of life will be held October 2, 2019, at 12:30 p.m. at Union Hope Baptist Church. A graveside service will immediately follow. Strickland Funeral Home in Wendell is handling the arrangements.

The family would like to extend immense gratitude for all the prayers and support they have received over last several months, especially to her caretakers: Audrey, Emma, Renee, Tia and Liberty Hospice Services.

Arrangments are with Strickland Funeral Home & Crematory in Wendell.  www.stricklandfuneral.com