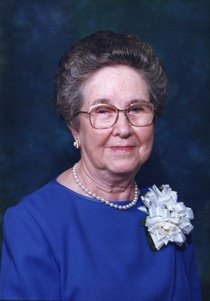 WENDELLL – On Thursday morning, February 20, 2014, Alta Ruth Cooke Burgess Spain, 88, of Wilmington and Wendell left this home for her new one in Heaven.  Alta was a sweet, gracious, and caring woman who loved the Lord and her family and set a godly example for all those who knew her.  Her children’s, grandchildren’s, and great grandchildren’s lives are much richer for the lessons she taught them by the way she lived.  She was born on July 11, 1925 in Wendell to Thomas A. and Pattie Richardson Cooke.  In 1947, she married Walter Burgess who preceded her in death in 1969.  In 1980, she and C. B. Spain were married.  C. B. died in 1994.  She was a faithful and active member of Wendell United Methodist Church while living in Wendell; and more recently attended Wrightsville Beach Baptist Church.

Upon graduation from college, Alta taught high school.  Later, her children were blessed to have her as a stay-at-home mom until the death of their father.  At that time she worked for Monk Henderson Tobacco Company and later for the North Carolina Association of Educators where she worked until her retirement.

In addition to her husbands and parents, she was preceded in death by her brother Charles Rogers and her sister Pauline Cooke Jordan.

Flowers are welcome or contributions may be made to the Wendell United Methodist Church Food Pantry or Building Fund, PO Box 1925, Wendell, NC, 27591 in memory of Alta Spain.

Funeral service will be held at Wendell United Methodist Church on Sunday, February 23, 2014 at 2:00 pm with visitation to follow in the church fellowship hall. Interment will follow in Greenmount Cemetery.

Her children arise up, and call her blessed (Proverbs 31:28a)